Fanfare for the Uncommon Bear

This post was authored by Salvatore M. Capizzi, Dunham's Chief Sales & Marketing Officer. If you have questions concerning today's topic, please call us at (858) 964 - 0500. Hold us to higher standards.

Majestically, the trumpets blared on March 12, 2020 as the Bear, who had been hibernating for almost 11 years, awoke and now menacingly walked down Wall Street, amazed at how long she had been away.1

Wounded, the Bull enviously watched from the side of the road.

After reaching an all-time high on February 19 of 2020, the Bull suffered as he watched his beloved S&P 500 decline -33.79% in just 33 days.1 Something called COVID-19, a pandemic, drove a dramatic sell-off in both domestic and international equities.

Proud of her handiwork, the Bear watched as in a 13-day span, the S&P 500 moved higher or lower by at least 3% on nine different trading days. Since 1980, history told her that on average these types of moves happen about four days a year.2

“How many investors are fleeing their worshipped stocks?” the Bear yelled, as she stood tall on her hind legs growling. Then, she silently wondered, “Had they learned anything from my prior Bear Markets?”

Of course, the Bear fully understood that no two markets are the same and she was shrewd enough to realize that past performance is never an indication of future results. She was also aware of the last 9 market cycles since World War II from the Dunham Market Cycle Chart. With an astute smile, she thought of the destruction she had brought in such a short period of time.

Fresh on her mind was the last market cycle, which began on October 9, 2007.1 After defeating the Bull in what was then the longest bull market ever, she would be directly responsible for a decline of -55.25% in the S&P 500.1 The Bear remembers the cry of journalists who yelled, “This time is different,” an illation she had heard before and one which historically never seemed to have a solid foundation as far as the Bull’s ability to revive markets.

Only once before did she create more havoc than she did from October 9, 2007 to March 9, 2009.1 On March 9, 2009, having seen enough, the Bull fought her and won. For over 11 years, the Bull proudly patrolled Wall Street until that fateful March 11, 2020 date when the Bear was able to vindictively exact her long-awaited revenge.

The Bear literally shook in rage as she thought about how during the Financial Crisis, despite her literally razing Wall Street to the ground, it took the Bull 3.1 years to get investors back to even from where they were on October 9, 2007 when her Bear market began.

The Bull did that by producing a 123.47% cumulative rate of return from equities in that 3.1 year period.1

The Bear felt a tremendous amount of self-satisfaction when she thought of all the people she scared into the safety of principal investments. “What CD, money market account, or treasury bond returned a 123.47% return in just over three years?”, she thought with a self-satisfied smugness. She knew those investors and retirees who sold their equities likely took many, many more years to break even.

She actually smiled as she thought about this and about the other market cycles from the Dunham Market Cycle Chart. What she remembered was this: 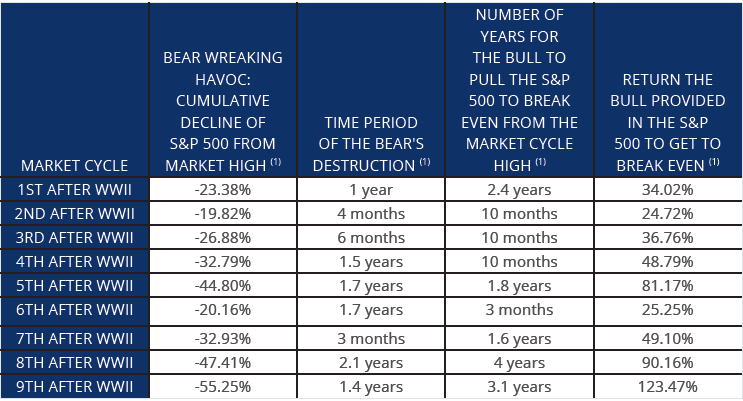 She fed on emotional investors who fled the markets. She would strike quickly, many times leaving little time to react and she left devastation in her wake. She knew that typically, markets move in cycles, in large chunks, and in relatively short time periods.

She reveled in the thought of how her menacing roar each day in a Bear Market had those emotional investors locking in their losses. She knew that historically, in each and every single case, there was not a CD or a money market that returned what the Bull did through the S&P 500. This pushed their ability to break even into the distant future.3

“The thing that was keeping them up at night, was exactly the thing that would help them recover from my destruction,” she thought.

In late March, the Bull returned to challenge her and won. It would be her shortest reign ever.4

Now, as the Bear lay defeated, she again thought of the Dunham Market Cycle Chart. She thought about how despite her best effort to destroy wealth, for those who stayed loyal to the Bull and to the S&P 500, they had what she considered strong returns.

In fact, each of the top of the market cycles could be considered the 9 worst days to invest. Yet generally, investors did really well.

The Bull beat her badly in the first three quarter of 2020 despite her triumphs in late February and most of March.

The Bear wrestled the Bull and destroyed 33.79% of total returns of the S&P 500 in just 1.2 months. Again, journalists screamed, “This time is different.” After all, we have never had a pandemic before.

Some investors sold all of their stocks close to the bottom and went into safety investments whose yields are currently at all-time lows.5

Even though the Bull was able to make quick work of the Bear, the Bear took solace in the fact that those who sold their stocks would never receive the same 51.04% rate of return in only 4.8 months that the Bull and the S&P 500 got investors who stuck with their stocks while she was in her glory.

Yet, despite the Bull being firmly in charge, she eyed him. The Bear stood ready to pounce as Covid-19 illnesses in Washington, elections, political unrest in the U.S., plus the U.S. and global economies still trying to get back on their feet, might catch the Bull off-guard and give her an opening to strike again.

“Mark my words,” she said aloud, as her growl reverberated through the canyon of Wall Street, “I will return and the journalists will once again cry, ‘This time is different,’ and many investors and retirees will again run from equities. Once more I will feed on the emotions of the time because some investors do not consider the general implications of history when it comes to their money.”

Disclosure:
Investments are subject to risks, including possible loss of principal. Investors should consider the investment objectives, risk factors and expenses of any investment carefully before investing. Diversification does not guarantee profit or ensure against loss. A bear market is defined as a market that is down 20 percent or more. A bull market is defined as a market that is up 20 percent or more. This graph is a representation of the S&P 500 including dividends. The S&P 500, is a stock market index based on the market capitalizations of 500 large companies having common stock listed on the NYSE or NASDAQ. The S&P 500 Index components and their weightings are determined by S&P Dow Jones Indices. It differs from other U.S. stock market indices, such as the Dow Jones Industrial Average or the Nasdaq Composite index, because of its diverse constituency and weighting methodology. It is one of the most commonly followed equity indices, and many consider it one of the best representations of the U.S. stock market, and a bellwether for the U.S. economy. You cannot invest directly in an index. All examples are hypothetical and are for illustrative purposes only. We encourage you to seek personalized advice from qualified professionals regarding all personal finance issues. The solution for an investor depends on their and their family’s unique circumstances and objectives. No two markets are the same and past performance is never an indication of future results.

The Fundamentals of Email Marketing for Financial Advisors

As a financial advisor, you likely have a list of prospects that you are hoping to convert into clients. This is where email marketing may prove to...

Anatomy of a Depression vs. a Recession

During the Financial Crisis of 2008, the running joke in the media was that the difference between a recession and a depression is that when your c...

The Stock Market Crash of 1987

Imagine finding out that today, the S&P 500 lost -20.47%. How would you react? Would you hold firm with your investment, or would you employ what w...

Why You Should Incorporate More Video Marketing in 2022

Video content is not just nice to have anymore - it's now the way audiences expect to engage with you. If you haven't yet incorporated video into y...

Once you grab the basics from this webinar, the Dunham team will provide additional resources and work with you to implement the Invisible Rich strategy.